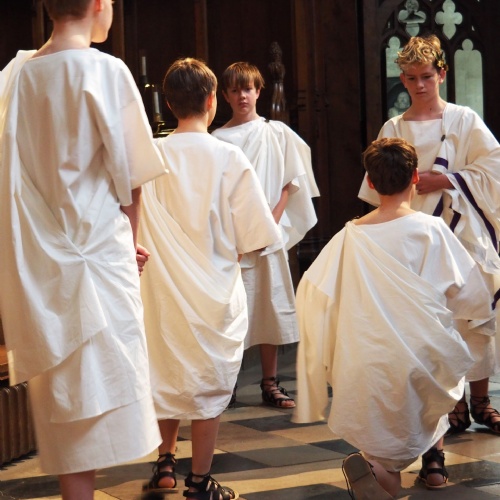 With its betrayal, murder and revenge, Julius Caesar has a good number of the elements key to making a play attractive to audiences keen on sensation, while the relevance of its themes to modern-day politics has ensured several stagings in recent years.

The abridged version performed by all boys in Years 7 and 8 retained the play’s core plot and its most famous speeches, while streamlining some of the less central elements. Year 7’s admirable Chorus provided the voice of a citizenry alarmed by Caesar’s vain drift towards tyranny, baying for his blood. But then, manipulated by Mark Antony’s ingenious rhetoric the Chorus turned on Brutus, Cassius and their co-conspirators. The final battle at Philippi (42BC) was briefer than that in Shakespeare’s original version, but there was still time and opportunity for the conspirators to die by their own hands.