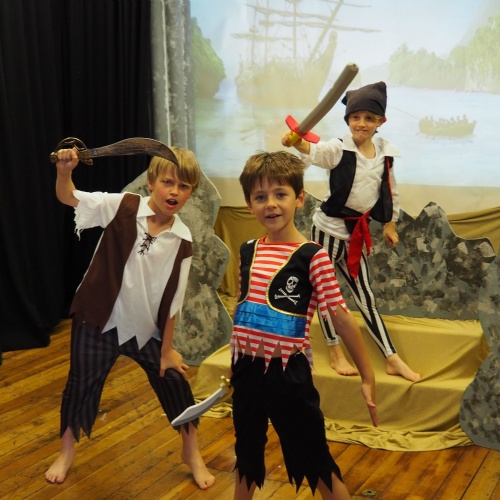 The rousing choruses of The Pirates of Penzance had been emanating from the open windows of the school for weeks when the Years 3&4 production finally took to the stage on 21 and 22 June.

The boys took to learning their songs with gusto; there was even a report of Ben leading a brilliant rendition of 'I am the Pirate King' from the back of the minibus after a triumph on the cricket field. With Harry as poor Ruth ('You will find me to be a wife in a million, Frederic!'), James as the Major-General, Patrick as Frederic and Lewie  flamboyantly brandishing a plastic truncheon as the Sergeant of Police, it was no wonder that Timon, Carter, Shivi and Nahum managed such convincing turns as the innocent girls caught up in the Pirate shenanigans of Victorian England.

All the boys polished up their diction, hammed up their acting and produced some riotous laughter from the appreciative audience in all the right places. JM's choreography had the boys flitting and fighting across the stage. DR produced sand dunes, boulders and all manner of head-gear apparently effortlessly; Professor Wilson gave us an enormous coil of rope, JK found us a beautiful anchor, PM cut plywood into scenery and GR brought it to life with her paintbrush. The boys' spirited show was not only a right-rollicking performance, but a tribute to all the staff who made such an effort to get it on the stage, and a memorable final Gilbert & Sullivan production for DR.