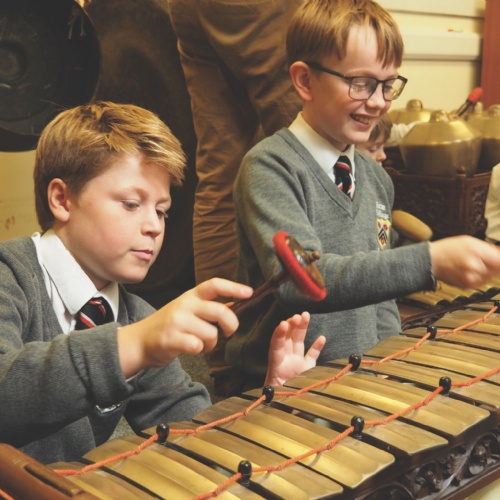 At the Paris Exposition of 1889, within sight of the recently-completed Eiffel Tower, Claude Debussy sat for hours listening to musicians from Java playing the instruments they had brought with them from the other side of the world: gongs, metallophones, drums, a stringed instrument and a wooden flute. He was entranced by the percussive, rhythmic complexities of the music, and his piece for piano- ‘Pagodes’- is a recreation of this other-worldly music on a western instrument.

The boys of Year 6 were far more familiar with the music of the gamelan than Debussy when they went to visit the Oxford gamelan at the Faculty of Music in September. They’d already seen performances by Javanese and Balinese musicians thanks to the modern teacher’s friend, YouTube, and had learned to play a balungan (tune) based on the pelog (five-note scale) as a class orchestra using a gamelan app. All very 21st century. But, despite not being surprised by the instruments that they were confronted with when they stepped into the somewhat cosy/bijou gamelan room at the music faculty, they were still delighted by the sonority of the ‘gong ageng’ - the lowest and largest gong - and stimulated and challenged by the coordination and timing required to play the saron, bonang, gender and kenong.

They sat shoeless, taking care to find their positions without stepping over the instruments for fear of breaking their connection with the gods (and perhaps falling over and hurting themselves) and played at an ear-splitting volume which presumably the gods found pretty hard to ignore. Debussy said, of the gamelan that he heard in Paris, “There used to be - indeed, despite the troubles that civilization has brought, there still are - some wonderful peoples who learn music as easily as one learns to breathe.” Well, I wouldn’t say the boys learned the music as easily as they once learned to breathe, but they certainly got there in the end. RP