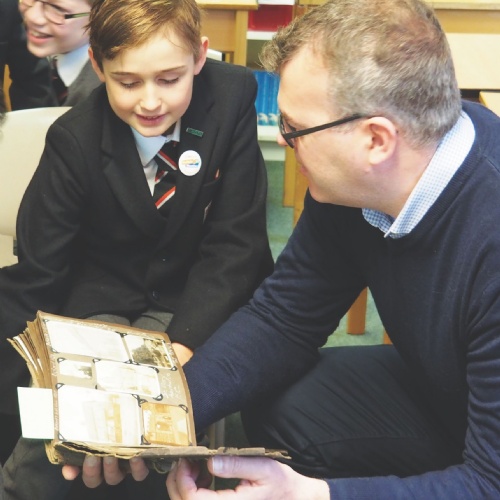 As part of their learning about World War I, Year 5 boys were delighted to welcome local historian Liz Woolley, to hear about her research about some of the Oxford men who fought in that war: ‘the sixty-six men of Grandpont’.

Liz brought with her the nephew of an NCS old boy who fought and died in the war: George Tyrrel. The boys enjoyed chatting with our guests about George, and they were able to look at some photographs and letters, which explained what it was like to fight in the trenches. They were also able to see and touch George’s hairbrush, which he had taken to the front line, and which has since remained a Tyrrel family treasure.

The boys then watched a short film which Liz put together about the men of Grandpont. It interspersed footage of soldiers leaving for the war with photographs of Grandpont houses of today, so it actually looked as if the soldiers were leaving their homes. Julien noticed that he lived just down the road from one of the houses in the film, really bringing home the fact that these soldiers came from the boys’ own communities. The film also featured many people whom Liz had contacted during her research, and were moved to discover that they were related to some of the Grandpont soldiers.

The session finished with the boys asking many questions about the soldiers and the war more generally. A few of them were aware of their own great-grandparents who had fought in the war, though of course as time passes that generational contact will become more and more distant. LBr