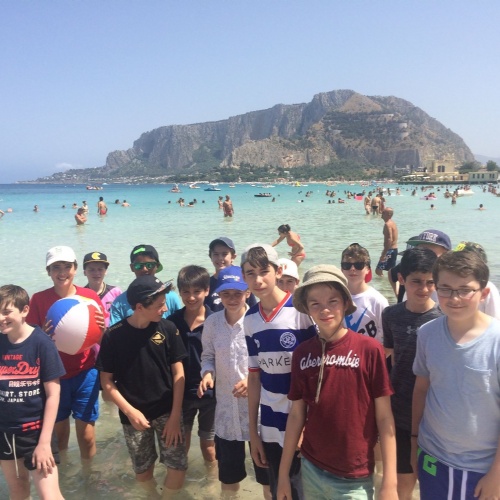 The Year 8 Sicily trip was the culmination of the boys' post-exam activities, and a fantastic chance for our leavers to spend time together sightseeing and eating gelati before heading off to their senior schools

In a slight tweak to last year’s itinerary, this year’s leavers’ trip began in Siracusa, described by Cicero as ‘the greatest Greek city and the most beautiful of them all’, and an important cultural and economic centre for a mere twenty-seven centuries. Another destination new to our itinerary was the nearby town of Noto, which became an enormous construction site in the 1700s, following a terrible earthquake in 1693, and which is now a UNESCO World Heritage site, famous for its fading Baroque beauty. From there, our Sicilian ‘road trip’ took us to: the Valley of the Temples, which features seven of the Mediterranean’s best-preserved ancient temples; the ancient theatre at Segesta on Mount Barbaro; Selinunte (dubbed ‘the Greek Pompeii’); the capital city Palermo, with its mix of European and Eastern influences; and the cathedral of Monreale, with its incredible gold mosaics. After all of that sightseeing, we deserved a rest, eating pizza and gelati in Mondello, taking in the spectacular backdrop of Monte Pellegrino, before a refreshing paddle in the clear blue waters. MTJ