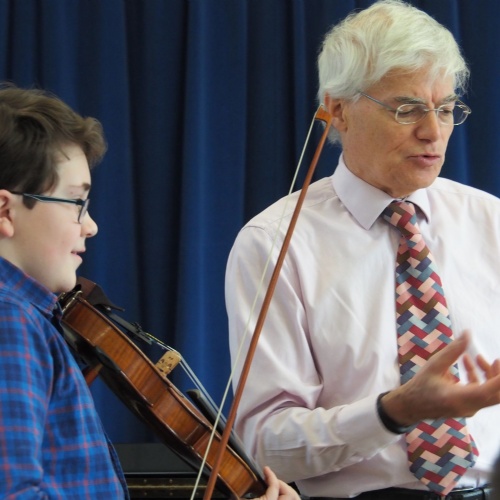 NCS musicians took part in a masterclass and concert at the Holywell Music Room, in preparation for their Music scholarship auditions

“By failing to prepare you are preparing to fail”: thus spake Benjamin Franklin. Heeding these words, the Music Award hopefuls of Year 8 brought their audition preparation to a climax with the Music Scholars’ Masterclass and, hard on its heels, the Holywell Concert. Once again Ralph Allwood, ex-Precentor of Eton College and director of the Eton Choral Courses, led the masterclass, and helped Kamran Akhavan, Oscar Bennett,  Theo Cawood, Hal Phillips, Jamie Robson and Ardhan Subramaniam  edge closer to perfection in their chosen pieces.

The boys (and audience) all learned the value of playing ‘off’ the music (i.e. not being glued to the copy, but looking up), practising slowly, looking confident (even if you don’t feel confident) and preparing mentally for a performance. Of as much value as the advice the boys received was the opportunity to play to an audience, and to become more comfortable in the role of performer, rather than simply ‘player’.

The masterclass was on Saturday; on Monday the same boys ran their audition programmes in the historic surroundings of the Holywell Music Room - Europe’s oldest purpose-built concert hall. The special venue gave an extra sense of occasion to the evening, and all of the boys played (and sang) beautifully. They were joined by Thomas Simpson (who loved playing the fabulous Holywell Steinway piano), Tom Barry and Christopher Brain, from Year 7, who were limbering up early for possible auditions next year.

“And how did they get on in the auditions?” I hear you roar. “Very well indeed, thank you for asking” is the answer. See the opening pages of the magazine for the full list of awards.